Hey everyone. Really sorry about the long delay between posts here, I've had a very busy fortnight and just haven't had time to post.
My time has pretty much been split three ways:


I had to do a pile of running around like a headless chicken looking for costume bits, things I'd forgotten about, picking up thread, and all kinds of things along those lines. I think I've only had two lunchbreaks where I haven't been riding off to somewhere in the city to pick up things for Continuum costumes. And I still haven't made it to Lefflers to get leather for SCA and Swordcraft stuff.

And of course, once I had all the bits together, assembly was required (huge thanks to Lisa for assistance with some shirt sewing stuff). I am certainly getting better with Sewing. Heck, I can even manage to reliably thread the thing, rather than the bobbin thread going "neener neener, you can't catch me". I finally finished my costume Friday middayish (with Continuum happening that afternoon).
Pictures shall be in the Continuum section below.


I went along to the University counselling service a couple of Wednesdays ago. It's one of the things Laura & I have said we should do with all the stuff that was going on with us, and lets face it, my brain probably needs a tuneup :)
I won't go into the details, but suffice to say it was certainly worthwhile (I have a followup session in a week and a half) and I think I'll get something out of it.


So, the thing that all this costuming etc had been leading up to was Continuum , a Fantasy/Sci Fi convention being run over the long weekend.
Now, for those unsure this wasn't one of those "Conventions" that you tend to see on TV, with thousands of people all in costume, standing in lines to see the latest X and posing with celebrities. This one is much smaller and more close-knit. A few people were in costume but it wasn't the norm (more on that below), and most of the programming consists of panels on various topics (Everything from "Is kids TV less traumatising now than it was when we were kids" to "How do you write different genders/cultures to your own" to "Two people loudly talking about their Doctor Who disagreements" [though there was a lot of agreement there...] ), with three to five people up the front nattering back and forth.
There were a lot of writers there, but we're not talking the big, household names, mostly smaller and/or local authors, people who write for fun, etc. And of course piles and piles of fans.


This was the first such Con that I've ever been to, and in true Darren style I kinda leaped right in and signed up to talk at a bunch of panels. I did "21st Century Storytelling", which was basically about Video Games becoming a more narrative-driven media and such, "Supernatural", about the TV series, and "Build it and they will come", which was about world building for Roleplaying games.
I've been told that I acquitted myself well all around, and I'm quite sure the people telling me this wouldn't have hesitated to correct me if I'd done badly, so I'll call it a win :)

Laura came up with the idea of doing a 'themed' day costume for the Saturday & Sunday, of Steampunk on Saturday and Goth on Sunday, and considering that I'm doing that whole "Say Yes to more things and try out stuff" thing, I decided to do so as well!
Unfortunately there's no picture of Sunday's Goth getup, but here's mine & Laura's Saturday steampunk ensembles (the flash does odd things, so I'll give you the flash and non-flash versions): 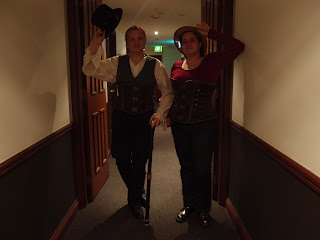 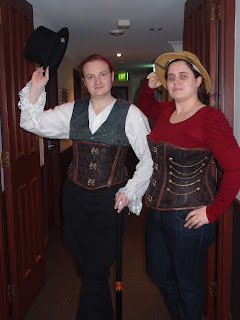 Then Saturday night was the Maskabolo ball, with the theme of "Enchantment under the Sea". Here's where my Captain Nemo costume got used. Unfortunately I don't seem to have a full body shot of it (though that will quite likely come later), but here's a shot of myself, Hespa as GLaDOS, and Laura as the Companion Cube. 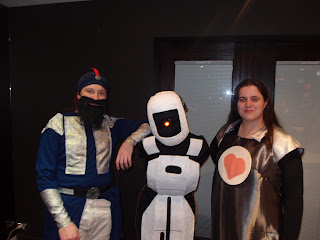 For reference, here's the character my costume was based on: 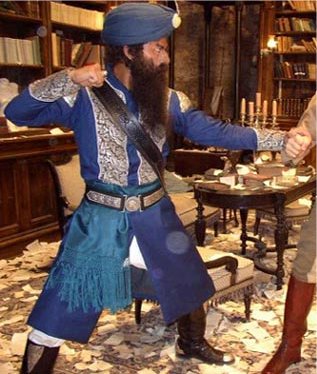 And here we have the Companion Cube valiantly defending Nemo from an onslaught by the evil computer system, GLaDOS... 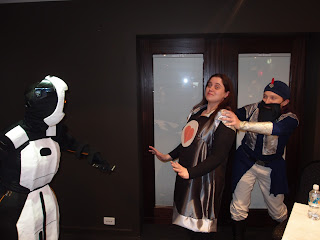 And Nemo gearing up to avenge the Companion Cube... 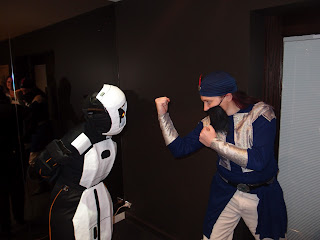 So yes, overall a fun time was had by all!!
I can definitely tick a few things off my "To Do" list, and I think I'm well within my rights to tick off the "Do something new/interesting/odd each month" option as well, since I went to my first such Convention, spoke on three panels in front of an audience, and went to both Lunch & Dinner in that crazy steampunk costume (Lygon street cafe in a steampunk corset & tophat? MADNESS!)
Overall, a very fun and very exhausting weekend! I'm now back at home (well duh) with a pile of costume and clothing bits strewn around the room, shoes and boots all over the floor, and a pile of dishes in the sink. One load of washing is currently in the machine (and probably due to come out now) and I'm really hoping there's enough food in the place for me to make dinner tonight.


So, I think that's all for today, it won't be a fortnight before the next post!
Also, can I please ask that anyone reading this posts a comment! Doesn't matter if it's just a "Haha, you look funny" or something, it'll do me good to remind myself that people are reading, plus seeing what people think is always fun.
Posted by Darren at 02:03

Darren
I'm a computer geek trying to achieve a one-year life improvement challenge :) Check out http://oneyear-betterme.blogspot.com.au/2012/05/chapter-one-new-beginning.html for the full details!